The Guardians of “Peace” have now done a victory lap by releasing another letter to Sony basically telling them (paraphrasing here):   Thanks, good job on not releasing the film.  And as long as you don’t ever show this film including the trailer, we promise not to release all the sensitive information we still have on your company. (Read the Article in Variety here).

I had no intention of seeing this film.  It looks ridiculous.  It isn’t my kind of film and although I respect these actors, producers, etc., for their talents in other projects, I could have cared less on so many levels about this film.  But now?  Now, this is about something else.  And it’s the only movie I want to see.

I believe we show who we really are, not when things are easy, but when things are tough (thank you Maya Angelou).  When things are hard, scary and unknowing is when WHO WE ARE matters.  The Guardians of “Peace” are messing with the one word the United States is known for:  FREEDOM.  And to that, I say FU!

I will see the movie the minute I can.  Thank YOU Guardians of “Peace”. 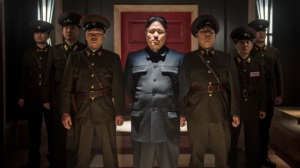 © Carmen Lezeth Suarez and Blog/Podcast Carmen S. Consulting. Unauthorized use and/or duplication of this material, including all photos, without expressed and written permission from this blog’s author and/or owner is strictly prohibited.