I was just on the phone with my good friend “John” (we’ll just call him that for this post). I was complaining, venting about how hard life can be at times and he asked me simply, without hesitation:  “If a million dollars landed on your doorstep, what would you do?”

We’ve all had this dream at one point or another, right?  The conversation is usually with one of my girlfriends as we finish off our typical weekly catch up call where they’ve complained about their husband or kids (or both) and I’ve complained about work, a date or my latest frustration, my neighbors. And as we finish off our chit-chat we remind each other to get our lotto tickets because “…you never know…” and “…hey, you can’t win if you don’t play.”  (That last one is my favorite).  But yeah, we’ve all had that dream, Am’I’Right? 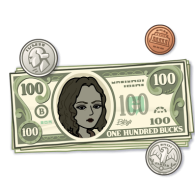 But today was a different.  This friend of mine is actually wealthy.  He’s in a position to drop bank and not think twice about it. I’m not sure if he’s the “million dollar” kind of bank or not, but he has “bank dropping” abilities nonetheless.  So interestingly the question sounded different coming from him.  It felt like a real question. I hesitated. I had no quick witted funny-isms, no:  “Gurl, we’d be killing it on a sandy beach somewhere watching some half – naked man serving us drinks” – no:  “Gurl first stop, Rodeo!” (It’s a Pretty Women thing).  I had nothing. I was stunned. Into silence. Rare.

Truth is, no one “needs” a million dollars especially if they didn’t earn it.  I calculated that if I could make $200K a year for the next 50 years, I’d be tre cool with that “tiny” amount (she said sarcastically)!  Interestingly enough $200K for 50 years is only $10 Million dollars. I say “only” because those lottery grabs are always so much more than that.  Truly, no one needs that much unearned money EVER!  Even the ultra-wealthy like Warren Buffett and Bill Gates give their excess money away because at some point it just makes sense to share it.  Seriously, how many homes, cars and shoes does one person need?  No, for real?

I honestly don’t need a million dollars dropped on my doorstep. But when I heard Donald Trump say:

I lost my dang-on mind! Even as I write that quote I cringe. There’s an actual sensation in my chest that feels like somethings burrowing deep into my being as I hear it, read it, write it. It bothers me so much.  I know I’m not alone in this.  But, I have finally figured out why.

People think they want loads of money.  People think they need lots of money.  A lot of dumb people think money can buy them happiness (yeah, my apologies for using the word “dumb” here but it really is dumb to think money can buy you happiness).  Money can provide choices. But choices are abundant even when you’re poor.  So, having money can sometimes give you too many choices and become a burden and lead you down the wrong path (Uhem, “Elephant” man bones, Michael Jackson…Google it. An extreme example, but you get the point).

What people actually want in life is security.  That’s a very different thing than loads of money but people confuse it all the time. It’s why I hate that quote from Donald Trump so much.  He doesn’t understand the security he has….

Money is a vehicle that allows for security, but make no mistake about it – security is a thing, and it hasn’t always been about about money for most of us.

I’ve wanted security my entire life.  And security comes in different forms throughout our lives.  You can see the joy in children who have parents – they may have very little money-wise or a lot of money, but if a young child has love, money is generally not even a thing.  It’s not even part of the conversation.  Think about it this way:  do you remember the first time when you realized you were poor?  Or, do you remember the first time you noticed you were rich? Do you remember whenever you found out that there was a status associated with how much money your family had or didn’t have?  Before that time, all you knew was (hopefully) the joy and happiness of being a child.

I remembered when I fully understood we didn’t have money. It was when my mama bought me boots.  I wanted to march in parades. I was part of an organization that marched in a lot of local events and I didn’t have the right real boots to wear. And one day she used the money that should have been used to pay for heat to buy me the boots I had wanted so badly and for so long.  She traded a utility bill payment to give her little girl a Christmas gift Santa had forgotten to give her.  We went without heat in the middle of winter.  And yet, despite our actual poverty, I always felt secure as a little kid. I knew even then, mama would take care of me, would take care of everything. But seeing her trade heat for a gift, was a realization I hadn’t comprehended fully till that moment. Yeah, we were poor.

As we get older that sense of security becomes our own responsibility. If you’re lucky, you’ve made some choices that maybe provided for some shared responsibility with a husband or wife – or maybe you’ve been able to get a great job with a 401K and good benefits. Maybe you’ve saved a bit, made good investments, and have a cushion of some sort. But see, security now becomes about how much money you have in the bank – and less about your mom or your dad providing that basic sense of safety.  But that oblivious sense of security – that blanket kind of comfort, that sense of well-being you had as a child that was all encompassing and about your safety, security and nurturing, is now all on you. And a lot of it is about how much money you have.  If you don’t have tons of money, then you do what you can to give your family and friends that sense of security and safety anyways.  And even if everyone else believes you’re doing okay, maybe the fact is, you live in that place where fulfilling your personal dreams and ambitions take a back seat to making money every day for your family or just to make ends meet. Taking care of your basic needs is priority numero uno.

Truth is, most people live paycheck to paycheck. There’s not a lot of time for being “creative” or “starting a business” when the fundamentals of living haven’t been met.  A lot of real honest hard-working people, who have done everything right don’t have much more than a couple of months or so savings to make it through if they lose their job (or, if they work for the government and there’s a shutdown – uhem).  It’s been estimated that 40% of people don’t have enough for a $400 emergency.  Rack it up to a $500 emergency and I bet it’s even more people! Fact is, you can make all the right choices in life and still lose everything because financial security is elusive to most regular folk.  It’s hard to dig yourself out of whatever hole you may be in trying to make a better life for yourself , your family (school loans, medical debt, etc.) and still save such an abundance of money (or credit) that you can live through any other financial emergency crisis that may occur AND fulfill some life long dream. I love that line about “pulling yourself up by your bootstraps”. I always counter with, “It’s much easier when you’re born with boots that have them bootstraps to pull on. I’m still walking around barefoot trying to find my way into the damn boot store.”

When someone like Donald Trump talks about it being so hard for him – maybe it was. I mean, everything is relative I do suppose so maybe for HIM it was difficult.  His world is so different from mine, so maybe it was hard for him to deal with receiving such a gift from his father. What angers me about the statement is his inability to understand how insulting it is to those of us who would give anything to have half the advantages he’s had in his life AND get an offer of any kind of loan or gift to make our dreams come true.

You see, because if all those basic necessities were paid and I was given a ton of money on top of all of that, I’d actually have to use that money to do something amazing and brilliant and I’d have an enormous amount of pressure to succeed.  Maybe that’d be scary.  To have no excuses? To have no worries of how to pay the rent?  To not be able to bitch and moan about how hard life is to make ends meet?  Maybe, that’d be scary.   But hell, I’d take that challenge every day of the week and twice on Sundays. I’m pretty sure most of my friends reading this post, would too. Wow, how to succeed when all you have is a million dollars and your dream.  Talk about First World Problems.  It took me ten years to complete and publish my first book. You know why? It wasn’t because I write slow.  It wasn’t because it was a complicated idea or I didn’t have a plan – NO. I wrote the book fairly quickly.  But I had to worry about all the other priorities that came first. And no, I didn’t have extra money readily available for an editor, for a book cover “designer” and blah, blah, blah. Basically, it took me ten years to write my first book because I had to do things like pay the rent.

I’m not saying it’d be easy, but yeah, go ahead Universe, bring it! I dare you.

I don’t “need” a million dollars to fall into my lap. But if it did, I’d pay all my bills for a year, and then go from there fulfilling the next steps of my dream. Because what I really want in life, what we all need in life, is a sense of security. A solid foundation to start from.  Then, on top of that, I’d take the opportunity to soar. That wouldn’t scare me at all. And I promise, at the very least, I’d  pay it back…with interest.

9 thoughts on “A Million Dollar “Gift””