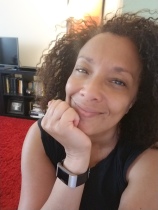 I walked down to the gas station so I could get a Lotto ticket and also to just get a little workout in.

I was sweaty and gross and as I was finalizing my lottery ticket (which I’m sure is going to win) when this young man came up to me and asked me if I was single.

Continue reading loose transcript below or listen to the podcast:

I was a little bit thrown.  Good looking young man, very well dressed and he was buying gas or something.

I looked behind me to see if he was talking to somebody behind me and he said, “No, I’m asking you. Are you single?”

I still couldn’t answer him because I was in shock.  He said, “I’d love to buy you a drink or maybe lunch or coffee…”.  He was so elegant and quite fantastic actually.

But I just looked at him and I just said, “You know, I can’t do that — my boyfriend’s waiting for me at home but thank you.  I appreciate it.”  And I just pivoted and walked away.

I started thinking about how embarrassed I was that he asked me.

Also he probably was half my age?  – Maybe not half my age, but it doesn’t matter –  he was young enough to be my son.  And although I was flattered by that, there’s a part of me that knows I have some very strict standards.

I am single because I have had two great loves in my life and I was so disappointed when they ended that I think it’s been very difficult for me to even consider the possibility ever again.

It’s not that they ended badly or that they were horrible, it’s just that when you really do love someone and you care for them it’s really difficult to lose that friendship as well as the relationship.

I’m not sitting here pretending that I could have been friends with these people ever again after what happened between us, but it was so disappointing, and it hurt me so much that I think it’s really hard for me to ever even consider anything less than what I want now and what I deserve.

It’s almost as if having those relationships have now set the bar really high.

So, I am not going to spend any more time on “finding love”.  Any more than I do on anything else in my life because I believe there is something very organic in relationships.

So yeah, I’m single.  But it’s a good thing, not a bad thing. It’s not preferred or something that I don’t like – it’s just where I’m at today.

In order for me to ever really consider ever dating someone again, he’s going to have to at least be in his 40’s – or at least turning 40 – and then all my other standards that I have.

I guess the reason why I’m sharing this post is because I wanted to say this:

What I don’t want is some of the relationships that some of my friends have.  They are in so deep with children and mortgages and their businesses are tied in and they feel like they can’t breathe.

You know what? Right now I’m single and I can breathe.  And I love it. And I don’t want that to change as much as I want to find someone that kind of fits into that puzzle pretty easily (if that makes any sense).

I just wanted to share that. I would love to hear your thoughts.

As always, have a sweet day. Thank you again for always stopping by — I appreciate it!

I’ll be back again soon.

8 thoughts on “Single and Breathing”

© Carmen Lezeth Suarez and Blog/Podcast Carmen S. Consulting. Unauthorized use and/or duplication of this material, including all photos, without expressed and written permission from this blog’s author and/or owner is strictly prohibited.