Well, today was a challenging day. The rain was fierce coming down throughout the day  and I had a client cancel and a project I had to put aside for a while.  I think that’s going to be the norm during this whole Coronavirus thing, but the loss of Michael weighed heavily in my bones as I went about doing things. I don’t want to harp on it too much – but losing someone you love is hard. But it’s also a part of life. I guess for me today it was about thinking too much about some great moments we had – I went and bought some chocolate today too to honor him and I laughed and then cried…  Yeah, I’m so sad he passed away.

Today was challenging because I had to much on my plate and I’m just finishing up the work on my To Do list. I’ve decided that I really need to make money doing something I love. For real.  I can’t keep working for people who don’t “get” it. People who are mean are one thing, but people who are not empathetic towards other people’s needs are a complete other.  Don’t get me wrong, I hate mean people too. But I hate even more working with people who are so caught up in their own world, so self-absorbed, that they don’t even recognize when they’re hurting people.  And here’s the thing: I can’t help but call it out.  Ugghh.

Now, you might think that sounds like a good thing, but I guess if I had a bucket of money somewhere and I didn’t have to pay any bills at all, then me calling people out on their bullcrap would be an okay thing to do.  But most times, when I have to say something, I resign, or quit or walkway and lost the job, at least on my own footing.

You know what though?  Being principled has lost me thousands and thousands of dollars.  I wouldn’t change a thing that I’ve done – don’t get me wrong. But it always bums me out when I just can’t keep my mouth shut any longer and have to tell someone, basically they’re an asshole.  Or, they’re a slimey asshole. Or, they’re a cheap slimey good-for-nothing asshole.  I think you’re getting the point.

Now, in all fairness, there have been people who appreciated the call out.  Some people, in this case an extremely wealthy woman, had no idea she was being a cheap asshole to her staff by not paying them more.  I was frustrated with her for a while, and finally I sat her down and told her sternly,

“You just came back from Barney’s with a wardrobe that includes a White Tshirt that cost over $600. Do you realize that’s more than what you pay your housekeeper for two weeks of work? She cleans your toilets for goodness sake and she’s asking you for $1 an hour raise and you’re having a complete breakdown over it. What is wrong with you?  Just stop it.”

She took it well. She took it like a woman of privilege who had a realization that she had lost her way.

Yeah, I took some solace in that.

Truth is, I’ll always be as honest as possible. I’m blunt, but I try to be as kind as I can be, till someone’s behavior is just too much. Then I’ll go off on them. It’s both a gift and a curse, of course. And although I may have lost a lot of money by saying my piece various times in the past and walking away from a client or job, I have no regrets. I can’t work for unethical people. I really can’t be around people who are mean.  And I really hate people who have no no emotional intelligence or integrity whatsoever.  So yeah, no regrets.

I’m so glad I just wrote that all out — somehow, I feel better. Today, was a good day. Yeah, I like who I am. I wouldn’t change a thing. Not for all the money in the world. And that ain’t no lie.

Well, I didn’t think I would write about that tonight, but there you go – surprise, surprise! I’m kind of loving this end-of-day journaling thing.  Hmmm.

Till tomorrow, I guess.

Someone once told me that I should have a goal of 100 rejections per year.

This had to do with my auditions and I know it sounds weird, but trust me, it’s an amazing concept!  And it can be applied to absolutely anything. The benefits of this kind of “reverse psychology”  are brilliant (in my humble opinion).

If you try for 100 rejections a year, then that means, at the very least, you’ve attempted 100 times to do whatever it is you’re trying to accomplish!

It also takes the onus off of “success” and just makes it sort of game. Can I do this and fail anyways? The pressure falls off and it becomes enjoyable to just try – somewhat light-hearted and…wait for it… Fun!

I love this principle. And here’s what I’ve learned in implementing it in my life: Eventually the law of averages takes over and you do succeed in some way shape or form. At the very least, you learn something. It’s kinda cool that way. I succeeded in my goals last year AND learned something about myself that was extremely important to my career and my life in general. It worked!

We all have goals – and my thinking is you should have a baseline: find a way to have joy most days in 2018. Happiness (JOY) is a thing! And setting myself up to have more joy in life is one of my goals for 2018. If something is not adding to my life, then I need to find a way to make it work or I need to let it go. This works for me. I hope it works for you too! And even if it doesn’t, maybe some variation of it does!  Please, at the very least, think on it. You deserve joy! We all do. We are here on the planet to love and be loved – of that, I’m extremely certain – do everything you can to stay in a good place. A positive space…

Happy New Year! I’m so glad you’re ON IT! No luck needed, but wishing you much joy in the process. And hey, I’ve already been rejected three times this year and it’s only January 7th! I’m so on my way to success. Looking forward to meeting you there! 🙂

Peace, love and all that good stuff.
Carm~ 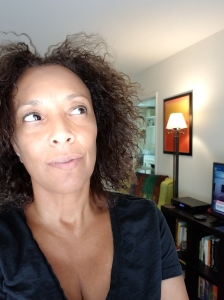